To comply with the new e-Privacy directive, we need to ask for your consent to set the cookies. Learn more. 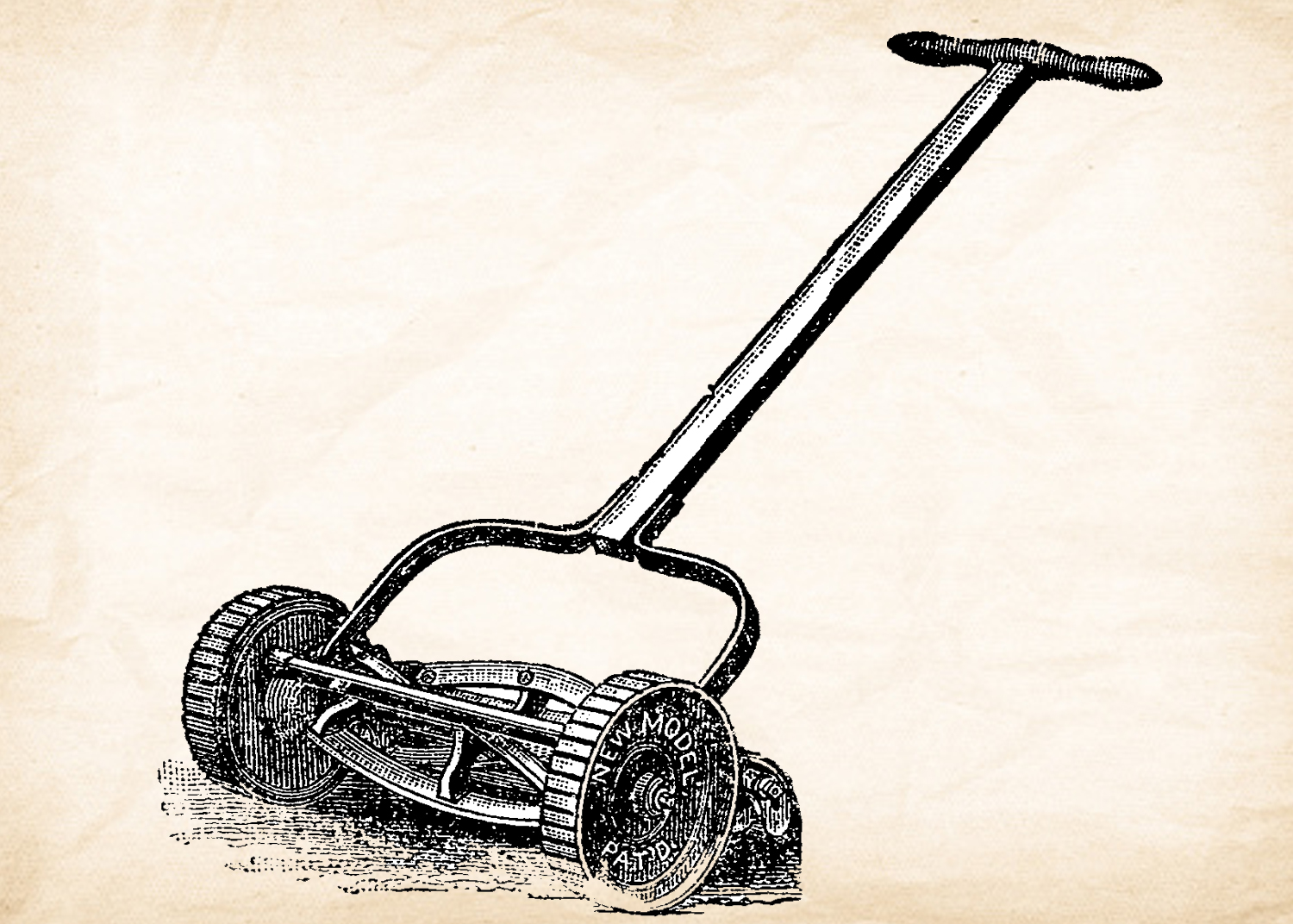 A brief history of the lawn mowers of yesterday, today and tomorrow

Once only the provenance of the wealthy, the garden lawn emerged as a seventeenth century status symbol amongst wealthy landowners using local workers to keep the grass around their country houses cropped with scythes, the original tool for lawn cutting that we’ve proudly adopted as part of our Green Reaper logo.

While a long way from the immaculate stripes of today’s well-tended suburban garden, it was the start of a trend that has become part of British vernacular, with mowing a weekly ritual of simple pleasure that is a welcome contrast to our sedentary, desk-bound lives. And while making this connection to a more pastoral existence seems timeless, the machines that we now use to mow our lawns have certainly developed over nearly two hundred years. Here we trace the fascinating history of the lawn mower, looking at not only how different types of mower came about but what the future holds with even more environmentally-friendly ways to keep your grass greener over the next decade.

Patented during the height of summer on August 31st 1830, the lawn mower was a British invention by Edwin Beard Budding who claimed it was “a new combination and application of machinery for the purpose of cropping or shearing the vegetable surface of lawns, grass-plants and pleasure grounds”. Ironically, it was the industrial revolution that led to the conception of a grass-cutting machine as Budding was a mechanic looking after the equipment in the local mills, and specifically cross-cutters used in textile manufacture which he then repurposed.  Made of wrought iron, his first mower was pushed from behind with gear wheels transmitting power from the rear roller to the knives on the cutting cylinder, with a further roller raised or lowered to alter the height of cut and the clippings thrown forward into a rudimentary tray. 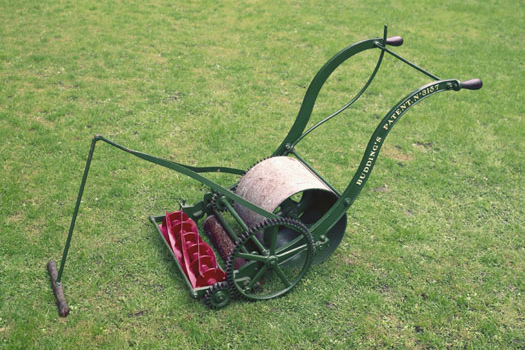 Although cruder in appearance, Budding’s invention was in many ways not dissimilar to today’s timeless cylinder push mowers, such as our ever-popular AL-KO 38.1 HM Premium which at £119 is both easy to manoeuvre and gentle on the lawn while being compact to store with a fold away aluminium handlebar. The AL-KO illustrates that if you want an environmentally-friendly option for a smaller lawn, a basic lawn mower can still be brilliant. 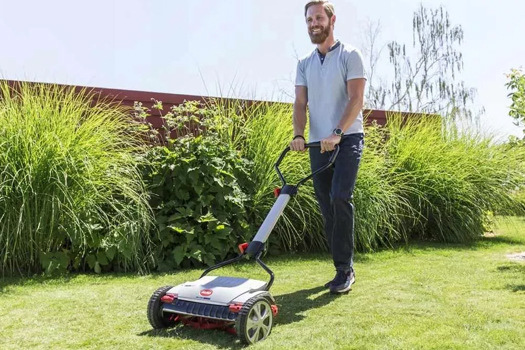 For the next seventy odd years, the use of lawn mowers grew at pace with many different types of machines made with varying degrees of success – including the first steam powered machine designed by James Sumner’s Leyland Steam Motor Company which later became synonymous with the British car industry. It was at the start of the twentieth century though, that the step-change to petrol mowers occurred and took lawn mowing to a new level of ease and efficiency. After Ransomes, Sims and Jefferies of Ipswich produced the first combustion engine mower in 1902, many manufacturers started to compete with ever better models and production soared post WW1.

Today petrol still has its advantages as it enables bigger mowers with definitive power to cut through tough grass in any weather conditions for hours at a time. Our best sellers at The Green Reaper include all different kinds of fuel-driven machines to suit every budget. For example, from just £300 you can choose one of the machines in the hand-pushed Cobra RM range, all featuring rear rollers to produce the classic ‘striped lawn’ look and perfect for the changing conditions of the British lawn, with the blade powered by a choice of Cobra's own brand engines, as well as ones from well-established manufacturers such as Briggs & Stratton, Honda, Kohler and Subaru. 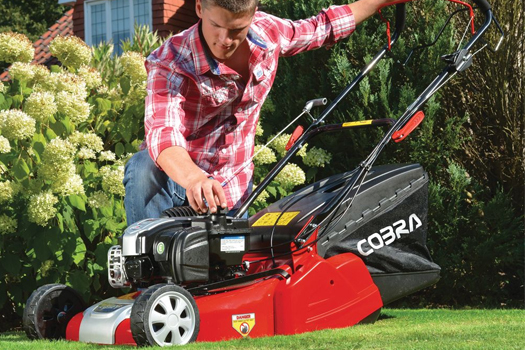 It is also a petrol engine (the Honda GXV390 four-stroke) that drives the most rugged of machines such as our Little Wonder Hydro BRC-26 field & brush mower, designed to cut through overgrown vegetation with ease and featuring a unique automatic transmission with a variable, clutchless speed selection up to 4.2mph so you can cut your own path, at your own pace. 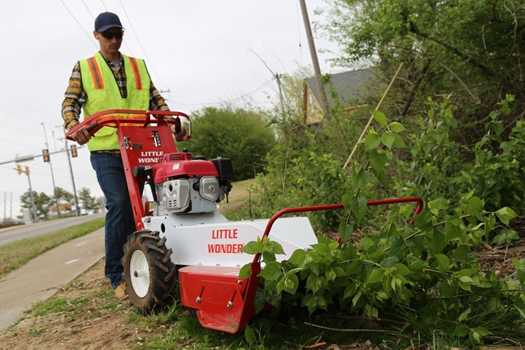 Most of our best-sellers for domestic lawn-cutting also benefit from technology first developed in the 1950’s which saw the introduction of the rotary blade as opposed to a cylinder cutter. Essentially, a high-speed horizontal blade spins at speed, cutting the grass through impact with  slightly raised edges to deliver a continuous airflow and suction that ‘chops’ the grass before delivering it to a rear collection box. Perfectly suited to all shapes and sizes of mower, a rotary blade is always used on our bigger ‘ride on’ mowers for larger lawns, due to its efficiency, such as our ever popular Lawnflite Optima MiniRider 76 RDHE (image shows 76 RDE) that perfectly suits the ‘step up’ to a sit-on with a compact design, electric start, automatic transmission, five cutting heights and a floating deck that allows you to get closer to edges. 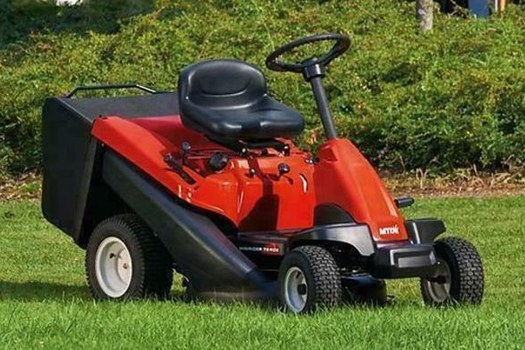 Undoubtedly, we should also mention the electric mower revolution that began some fifty-plus years ago with brand such as the classic 1970’s Flymo ‘hover’ mower based on hovercraft technology. Using a fan so that the mower effectively ‘floats’ above the grass, it is a design that continues today with the self-mulching Cobra AirMow 51 80V and arguably it is still the best way to deal with undulating gardens or slopes effectively. The AirMow is also the world’s first cordless ‘hover’ mower available in the UK, reflecting how much the electric mower market has now moved on from plugging in a lead and the constant vigilance associated with it, whatever type of mower you choose. Indeed, the advantages of the latest lithium batteries for mowers are many fold, including being smaller, lighter, quicker to charge and longer lasting. 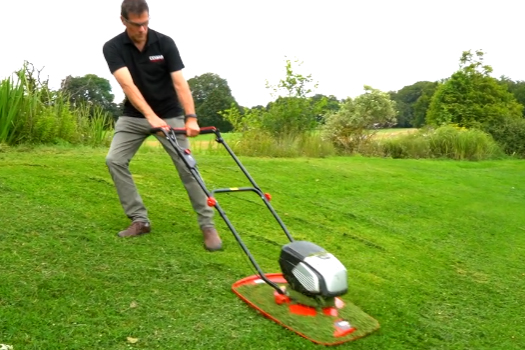 We particularly like the way in which manufacturers such as Greenworks ensure that many of their machines come with 2 x 24v batteries to not only power the mower but be interchangeable with their strimmers, chainsaws and hedge trimmers. And if you want even more power, The T3 Awards which recognise category innovation has just voted the Greenworks GD60LM46SP mower a top buy for not only its good looks, long-life steel cutting deck and brushless motor, but the mower’s big 60V battery power that provides the endurance to tackle tough tasks in the garden with petrol-matching performance. 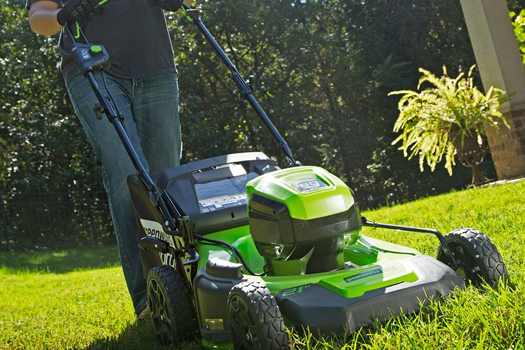 So what’s next in the evolution of the lawn mower? Well perhaps the future has already arrived with the new generation of grass-cutting machines taking robotic form which in theory means that you’ll never need to worry about mowing the lawn again. Sit back and relax with the ultimate mowing status symbol such as one of the machines in the Cobra Mowbot range. 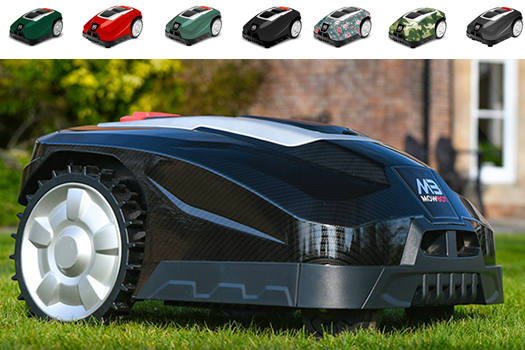 Sleek, stylish and even available in a range of customisable colours such as camouflage and floral, the Mowbots use Bluetooth technology so you can control the ‘little and often’ mowing technique it uses, or return it to its base station from your phone or tablet. Why not check out this mowing vision with a video that introduces how the Mowbots work, and the programming you’ll need to do before this permanent feature of your garden becomes your AI lawn-mowing friend.

We hope you’ve enjoyed learning more about mowers and how they have evolved since the first hand-cut lawns of the privileged few. With more options for lawn mowing than ever before, we think that the grass may really be greener on the other side. Why not have a look at our latest range and find out for yourself whether it’s time to upgrade your machine. After all, as a wise gardener once said “A beautiful lawn doesn’t happen by itself”. 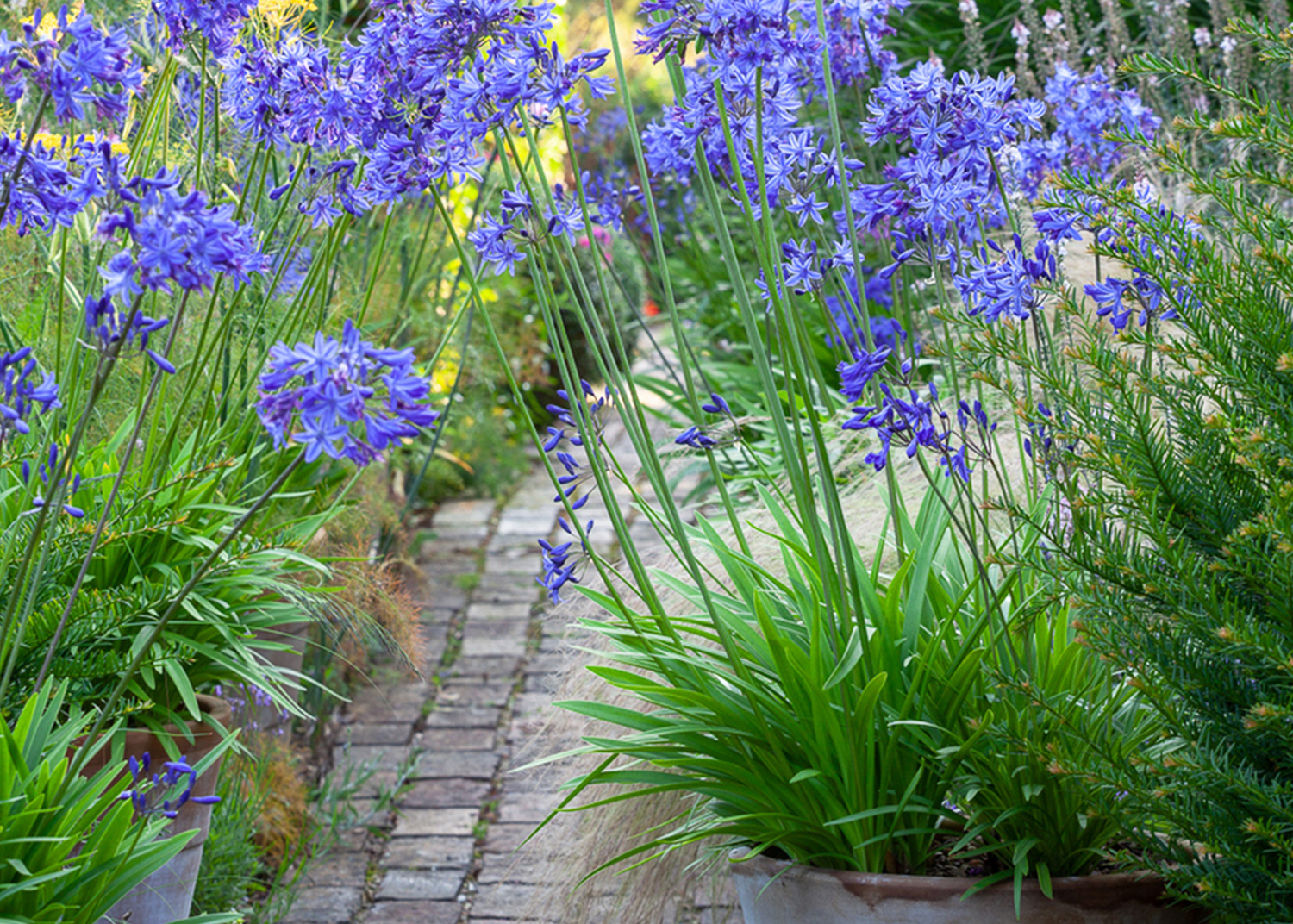 NEXT →
Blown away by autumn's beauty 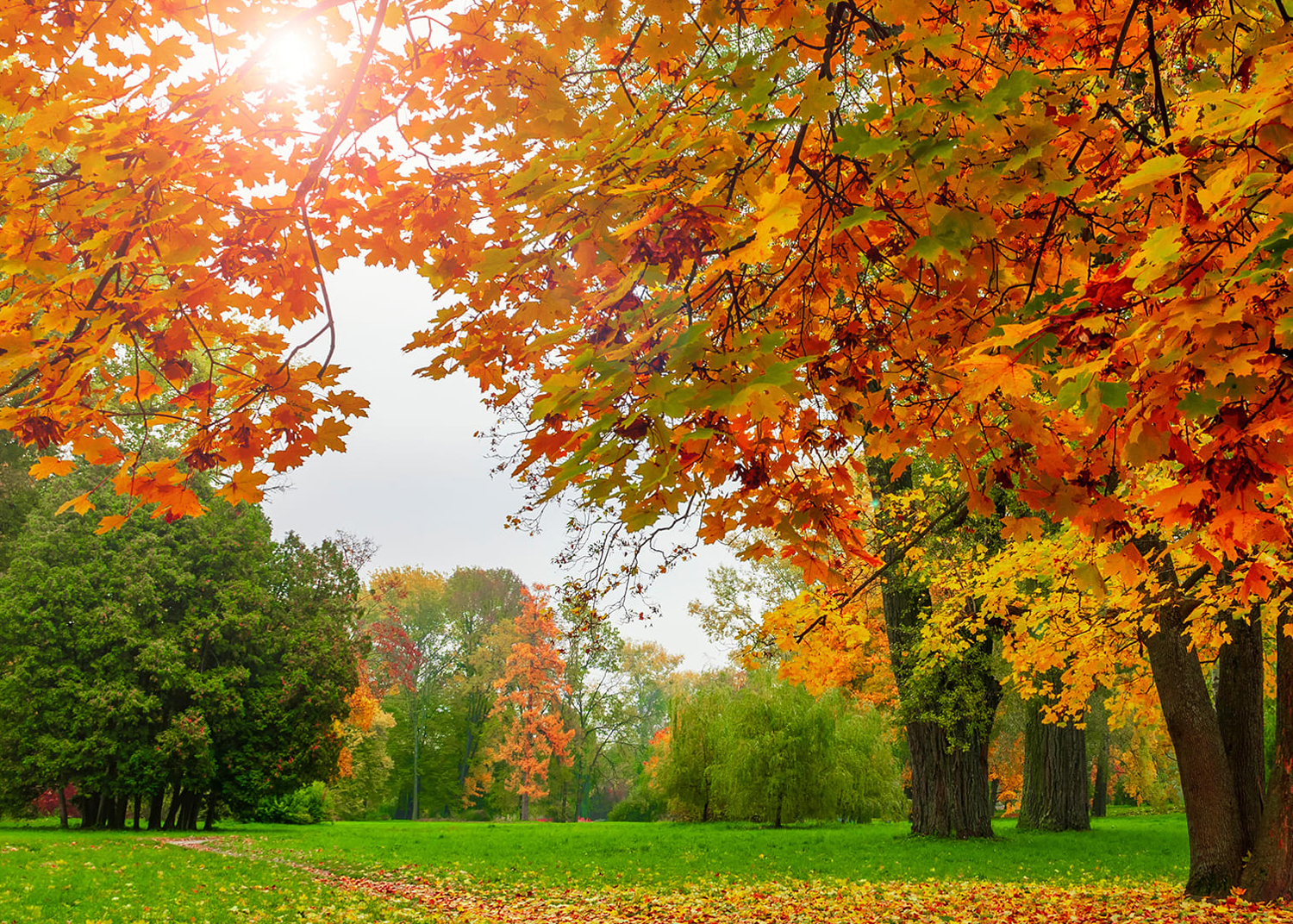 # Type at least 3 characters to search # Hit enter to search